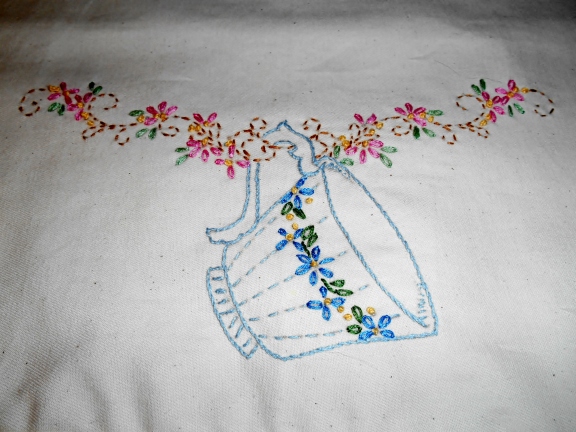 I was looking through my fabric stash and found some medium weight organic cotton I had bought several years ago.  It was a markdown from a quilt shop that was going out of business. At the time I was just intrigued with the idea of organic cotton. It was soft as well as having  a good weight to it. The  natural unbleached cream color I could use for anything. It dawned on me that this would be perfect to make kitchen tea towels out of.   It was 60 inches wide, which made it easy to cut 2 towels. A 20 inch cut from the end of the fabric and then cut a along the fold to give me the two towels. I hemmed the  edges on the sewing machine to make the towel 28 inches long by 18 inches wide. I ironed on the transfer pattern from Aunt Martha’s.  I had had this transfer set for about 20 years and had never used it.

The cotton was easy to needle and it didn’t take long to finish both towels.  The next step was to figure out what edging pattern to use.  I have a large box of number 10 crochet cotton to rummage through in my stash.  I chose a variegated pastel colored thread that matched the spring like colors I had chosen for the embroidery floss. The floss was also organic.  I found it at a local hobby shop.  Then I though maybe I should go back and get organic cotton crochet thread.  There I found a pastel varigated number 10 thread.

What I had in mind was little daisies along the bottom of the towels.  I remembered I had a free tutorial pinned to my pininterst board, I have a large collection of vintage crochet patterns that I have used over the years but I find it fun to look through all the youtube and free patterns that are offered on the internet. I often think of my aunts that were avid crocheters would think of what patterns are now being offered.  The patterns that catch my eye are usually from Eastern Europe and I have to use a translator for them and use the pictures as a guide. The terminology doesn’t match up with what is used in the US.  This is the case on this easy little tutorial.