Toile de Jouy simply means “cloth made in Jouy en Josas,” a village in southwest France.  This type of cloth was soon just called by this name even though it was made in other countries. The factory became famous because of it’s monochromatic prints of scenes with people in the French country side.  Come join us as we explore this fabric that began in 1760 and is still produced today even though the original factory closed in 1843.

The factory was founded in 1760 by Christophe-Philippe Oberkampf.  He was a descendant of family of Bavarian dyers.  He was inspired by the traditional Indian printing techniques. In 1686 France banned the Indian fabrics both the import and making of them.  This was not lifted until 1759. France was behind in this technology of this very popular fashion in fabrics. Oberkampf left Germany and started the factory.  Other countries that was printing fabric was England and Netherlands using this technique. The first 10 years of the factory in Jouy-en-Josas, wooden blocks was used in the printing.  The process is explained by:http://www.toilesdejouydecoration.fr/…

For the actual printing process, wooden blocks were carved to reproduce specific patterns in relief. ‘Mordants’(starch, iron aceta or alumna) were then applied on to the wooden block, which was then used to print the prepared cloth . Therefore dyes weren’t directly applied on to the cloth but ‘mordants’ were. After treatment, these ‘mordants’ revealed the desired colors.

After printing, the cloth was rinsed in a vat of cow dung and then washed. In order to reveal the colors on the areas stamped by the ‘mordants’, the cloth was plunged into a vat full of dye, made from madder roots. This process is called ‘garançage’. A range of colors was obtained using this technique: from dark red to soft pink, from black to lilac, violet or brown. Since the background would become pinkish, the cloth was laid out in the prairies to bleach. To print patterns in yellow and blue, the dyes were directly applied on to the cloth. Until 1808 green was obtained by applying layers of blue and yellow. In 1808 Samuel Widmer, Oberkampf’s nephew, discovered a green dye that could be applied directly on to the cloth.

After the finishing touches, a last coating was applied to some of the pieces. This coating was made of a mixture of wax and starch. Once coated the piece was flattened through a hot calender. To give a satin finish, the piece was then smoothed using a machine called ‘lissoir’, which consisted of an articulate arm that would flatten the cloth with ‘marbles’ of agate or crystal. 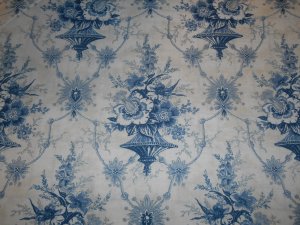 At first the prints were only of flowers and vases. Brass plates were added to the wooden blocks to give fine detail like stems.  To produce little dots used for shading fine nails were hammered into the blocks. This was called picotage and was used in backgrounds.

This was a very labor intensive process and took time to produce the beautiful cloth that was so fashionable.  In Dublin, Ireland, Francis Nixon developed fabric printing using a copper tube stamped or engraved with the design in 1752. This cylinder system sped up the process of stamping the fabric.  Where block stamping was done to produce a pattern using many different blocks that had to be lined up.  The blocks were usually 10 inches where as copper tubes were up to 45 inches on a tube. This had an advantage of repeating design areas.  It also could produce very fine detail that was not able to do with wooden blocks.

In 1770, Oberkampf started to use the new cylinder printing process and that led to the monochromatic print that his factory was known for and became synonymous for the fabric’s name. It was printed in blue, red and black on white or cream background fabric. 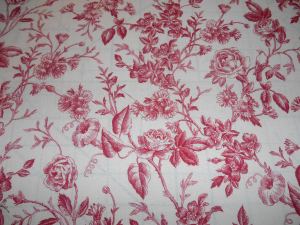 Artist Jean Baptiste Huet in 1783, became art director for the factory.  He designed cameo prints that became lasting signature of this fabric.  He produce idyllic scenes of life during that time period.  He died in 1811 leaving a legacy of design that is still produced today for home decor. Oberkampf died in 1815. 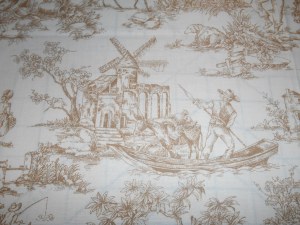 In 1783, King Louis XVI proclaimed Oberkampf to be Manufacture Royale de Jouy because Maria Antoinette was a great supporter of the fabric.  It was very popular among the upper classes. The most famous print was of the process and factory in Jouy-en-Josas. There was other factories in France that produced the fabric in Rouen, Alsace and Nantes. Even Americans loved the fabric.  Benjamin Franklin used the fabric for his home. One of the famous American toiles were cameos of the sons of liberty.  It was entitled “American Presenting at the Alter of Liberty Medallions Her Illustrious Sons.” 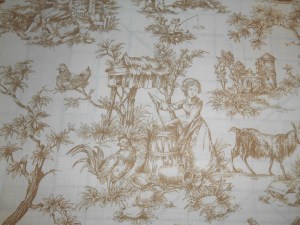 People was also fascinated with scenes from far away places like China and India.  The Chines prints was called Chinoiserie fabrics that had Chines characters and oriental scenes.  This fashion also went along with pottery imported from China.  This came from engravings of Jean Baptieste Pillement and Francoise Boucher that had traveled to the Far East.  Almost all of the chinoiserie designs were not orginal and was also copied by ceramic factories from books of engravings.

Today the traditional designs are still being produced and are being used in quilting as well as home decor.  During the 1970’s toile prints were used in fashion fabrics of heat transfer polyester knits. 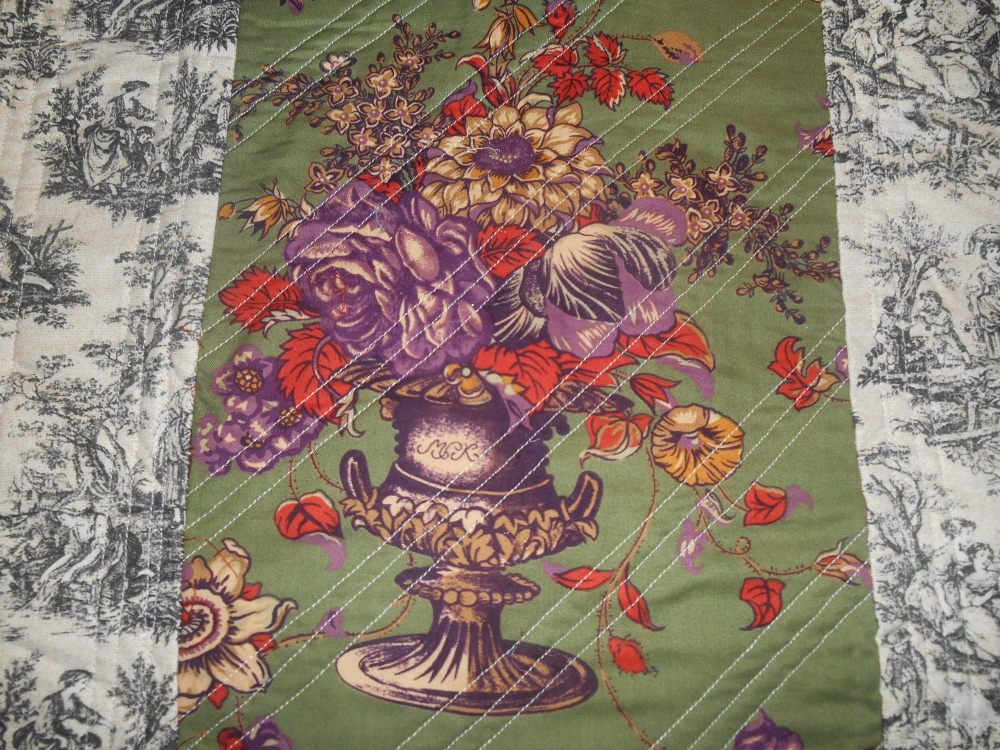 Reproduction print of print toile by Mary Kovel that I used on the back of a “strippy quilt.” This is in the traditional 19th century colors green, chrome cheddar and madder brown/purple. The triple quilting was also common in the first half of the 19th century.

Strips were also a main fashion in decor during the first part of 19th century. The upper classes set the fashion and ladies would copy it in their quilting.  The result was a quilt that is called a “strippy” by today’s collectors of antique quilts. Lower classes of women didn’t have the homes that they could paint stripes on the walls or furniture that could be covered in striped fabric.  This was their way of decorating their homes fashionably. They would piece from scraps of fabric blocks then join them with strips of fabric to make strips. The backs some times were also pieced with strips of fabric.

We did not manufacture fabric until 1815 which was a coarse white muslin that was called domestic. It was not until 1830 that we started to print fabric.  Strippy quilts was popular from the 1830’s until the Civil War.  Toile continued to show up in quilts after the Civil War mostly in curtain fabric.  Nothing was wasted when it came to fabric because it was expensive.

You are invited to follow me on face book.